LOUD has every potential to live up to its name. The Vancouver duo of Elaine Stef on electric guitar and Eileen Kage on taiko drums and percussion has released the long-awaited follow-up to their CD debut, Taikoelectric. Move over White Stripes and Black Keys; it’s hard to imagine a more lethal sonic assault than the ear-bleeding amplification of a solid body six-string and the bone-rattling concussions of Japan’s monster drums. But, the new disc called ‘echo and flow’ is more about dynamics than pedal to the metal volume. Elaine and Eileen have had much time to play with the nuances of their unique arrangement since forming 1996. What they have seemingly perfected on echo and flow are instrumental compositions rich in propulsive rhythm and flights of astral guitar textures. There’s something very surf and retro in Elaine Stef’s approach to the guitar. Simple effects of reverb and tremolo lift chimey licks that crash and recede like waves. Meanwhile Eileen Kage motivates the tumbling, roiling and flow through the booms, clicks and clatter of her taiko battery. Eloquently, their singular sound has been described as “the soundtrack to the world breathing and the soul stirring. Read the full review »

‘echo and flow’ Review in BC Musician

. . . Drummer Eileen Kage lays down a solid quake of intricate percussion while guitarist Elaine Stef slathers the beats down with a molten layer of smouldering echotronics.  Yet, Echo and Flow is also brimming with layered melodies and subtle rhythmic inflections.  All the instrumental pieces on the record flow together like a river of sound, where the water is sometimes calm, it quickens, then meanders, widens and narrows, and at times we are even lured in to frothing white water. Read the full review »

‘echo and flow’ Review in The Bulletin

. . . Their new CD Echo and Flow is a striking piece of work that builds off the success of their first recording, taikoelectric. The recording studio allows the duo to really zero in on the sounds of their respective instruments. Kage plays with great sensitivity, treating her selection of drums as a sonic palate which she uses to create a complex, pulsing bed of rhythms. Stef’s guitar, which is sometimes reminiscent of U2’s The Edge, is the perfect foil to Kage’s taiko—her hypnotic, echo-laden arpeggios floating ethereally over top of the drums. The group’s website notes that the songs are created a through a process of jamming and this shows in the finished pieces which for the most part have no distinct beginning or end, but rather have an organic feel—the music washing over the listener in wave after wave. Read the full review »

‘echo and flow’ Review in The Province

Electric guitarist Elaine Stef and taiko drummer/percussionist Eileen Kage have performed together for years as Loud. On the group’s second album, they offer up 10 instrumentals that do indeed “echo and flow.” It’s quite amazing how many different moods and styles the two manage to evoke with the limited instrumentation on hand too. “What You Carry” takes Stef’s skittish sharp guitar riff and rides it above the resonant bassy tones of the taiko drum while congas fill in the rhythm in between. At times, it’s similar to the more experimental work of David Sylvian while maintaining a decidedly West Coast post-hardcore sensibility. What none of the album is, however, is loud. Rather it’s the wavelike grooves of the appropriately named “A Sea of Change,” that define the disc. View it here »

‘echo and flow’ Review in The Georgia Straight

On the material plane, Loud’s Elaine Stef and Eileen Kage don’t have a lot to work with: more often than not they perform with just a single electric guitar, an amp, and a handful of taiko drums. It’s a luxurious day for the instrumental duo when they can add a cymbal or two; keeping it simple is the essence of what they do. But the number of road cases a band carries isn’t indicative of its collective intelligence, its imaginative prowess, or its ability to function as a unit. On those levels, these two Vancouver women surpass all expectations. Read more »

LOUD had our unofficial CD release party for ‘echo and flow’ on August 4th at the 2012 Powell Street Festival.  It was great to have the CD ready in time for the festival.  As always we'd like to thank the organizers and volunteers for putting on such an amazing event.

We would also like to acknowledge and thank Kathy Shimizu, who has done a beautiful job revamping our website.  There is still some tweaking to be done over the next while, but its pretty much there.

We have started sending the CD out into the world, and have been receiving congratulations and great feedback.  As the reviews come in, we will post them up.

Thanks to the people purchasing the CD for their support of independent music.

We will be reaching out to some festivals for some touring action in 2013. 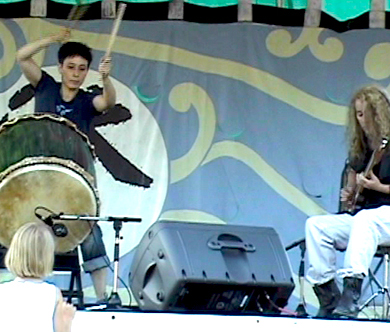