Reviews of echo and flow

LOUD has every potential to live up to its name. The Vancouver duo of Elaine Stef on electric guitar and Eileen Kage on taiko drums and percussion has released the long-awaited follow-up to their CD debut, Taikoelectric. Move over White Stripes and Black Keys; it’s hard to imagine a more lethal sonic assault than the ear-bleeding amplification of a solid body six-string and the bone-rattling concussions of Japan’s monster drums. But, the new disc called ‘echo and flow’ is more about dynamics than pedal to the metal volume. Elaine and Eileen have had much time to play with the nuances of their unique arrangement since forming 1996. What they have seemingly perfected on echo and flow are instrumental compositions rich in propulsive rhythm and flights of astral guitar textures. There’s something very surf and retro in Elaine Stef’s approach to the guitar. Simple effects of reverb and tremolo lift chimey licks that crash and recede like waves. Meanwhile Eileen Kage motivates the tumbling, roiling and flow through the booms, clicks and clatter of her taiko battery. Eloquently, their singular sound has been described as “the soundtrack to the world breathing and the soul stirring.” Duos have the capacity for a sixth sense; here, Elaine and Eileen demonstrate the telepathic ability to anticipate every surge and ebb as one. Vancouver music fans will appreciate ‘echo and flow’ as one of the final few recordings to come out of historic and soon to be closed Mushroom Studios, recorded by renowned knob-twiddler Greg Reely. There’s a surprising amount of diversity between tracks considering the Spartan arrangements. The polyrhythmic ‘ESP’ sets the tone and the synergy between strings and skins. Other personal faves include ‘With Bells On’, the innately groovy ‘Exhale’ and mixed moods of ‘Brenda B.’. In the context of an old tyme record store, it would be hard to find the appropriate bin for ‘echo and flow’, but I guarantee there’s a welcome open spot for LOUD in your personal collection.

Formed as a trio in 1996, Vancouver’s LOUD has been performing as a very unique instrumental duo since 2001.  Unique because the band performs, almost exclusively, using primarily Japanese taiko drums and electric guitar.

Drummer Eileen Kage lays down a solid quake of intricate percussion while guitarist Elaine Stef slathers the beats down with a molten layer of smouldering echotronics. Yet, Echo and Flow is also brimming with layered melodies and subtle rhythmic inflections. All the instrumental pieces on the record flow together like a river of sound, where the water is sometimes calm, it quickens, then meanders, widens and narrows, and at times we are even lured in to frothing white water.

The compositions can at times be reminiscent of contemporary minimalist composers such as Steve Reich, at other times comparable to such guitar experimentalists as Bill Frizzell or Fred Frith, and even moments when they take on the flavour and syncopation of the electric blues styles currently coming out of Mali’s Tuareg Berber communities.

Loud’s sound is gorgeously lush and cinematic, while at the same time it resonates with a pulse that feels as if it emanates directly from the heart of the planet. Ancient and psychedelic, Echo and Flow possesses a grounding quality that is both sonically soothing and utterly addictive.

LOUD is a Vancouver-based duo made up of taiko player Eileen Kage (formerly of Katari Taiko, Uzume Taiko and Sawagi Taiko and currently a member of JODAIKO) and guitarist Elaine Stef (formerly of Moral Lepers and Animal Slaves). The group was formed in 1996 by Kage, Stef and former member Leslie Komori as a means of exploring the place where the electric guitar and traditional Japanese percussion instruments can not only coexist but complement each other.

Even the most ardent taiko fans will acknowledge that taiko recordings rarely do justice to what is essentially a live art form. Not only are the drums difficult to record, once the visual elements are stripped away it is next to impossible to retain the essence of the performance. The lack of a melodic structure to hang onto in traditional taiko makes it all the more difficult to create a recording that is pleasing to the ears.

LOUD is the only taiko-based group I know of that benefits from the recording process (with the notable exception perhaps of Japan’s Leonard Eto) and indeed is more effective on CD than on stage. This is achieved mainly through throwing all taiko conventions out the window and treating the drums as a melodic counterpoint to the guitar, with tone taking precedence over all else.

Their new CD Echo and Flow is a striking piece of work that builds off the success of their first recording, taikoelectric. The recording studio allows the duo to really zero in on the sounds of their respective instruments. Kage plays with great sensitivity, treating her selection of drums as a sonic palate which she uses to create a complex, pulsing bed of rhythms. Stef’s guitar, which is sometimes reminiscent of U2’s The Edge, is the perfect foil to Kage’s taiko—her hypnotic, echo-laden arpeggios floating ethereally over top of the drums. The group’s website notes that the songs are created a through a process of jamming and this shows in the finished pieces which for the most part have no distinct beginning or end, but rather have an organic feel—the music washing over the listener in wave after wave.

Keeping with the water analogy, the ten songs on Echo and Flow run into each other seamlessly, creating an overall mood that shifts in subtle increments–ebbing and flowing, sometimes soothing, sometime stimulating, but always engaging.

Electric guitarist Elaine Stef and taiko drummer/percussionist Eileen Kage have performed together for years as Loud. On the group’s second album, they offer up 10 instrumentals that do indeed “echo and flow.” It’s quite amazing how many different moods and styles the two manage to evoke with the limited instrumentation on hand too. “What You Carry” takes Stef’s skittish sharp guitar riff and rides it above the resonant bassy tones of the taiko drum while congas fill in the rhythm in between. At times, it’s similar to the more experimental work of David Sylvian while maintaining a decidedly West Coast post-hardcore sensibility. What none of the album is, however, is loud. Rather it’s the wavelike grooves of the appropriately named “A Sea of Change,” that define the disc.

On the material plane, Loud’s Elaine Stef and Eileen Kage don’t have a lot to work with: more often than not they perform with just a single electric guitar, an amp, and a handful of taiko drums. It’s a luxurious day for the instrumental duo when they can add a cymbal or two; keeping it simple is the essence of what they do. But the number of road cases a band carries isn’t indicative of its collective intelligence, its imaginative prowess, or its ability to function as a unit. On those levels, these two Vancouver women surpass all expectations.

Loud’s basic template is to set a fast-strummed guitar, usually unaltered by electronic processing, atop a bed of surging percussion.  Several songs on Echo and Flow follow that pattern, which ought to make for a monotonous listening experience but doesn’t. Instead, these pieces establish an almost hypnotic momentum; at times they sound like minimalist compositions recast as electric folk music.

That said, some of Echo and Flow’s most effective tracks break the mould. When a distorted, single-note melody enters on postrock stunner “Brenda B.”, the music takes flight, and the Middle Eastern touches on opening track “ESP” are earwormishly seductive. Most of the time Kage and Stef needn’t depart far from their formula, though, because it’s a winning combination.

“Pounding, haunting and rhythmic, [taikoelectric] is an instrumental album that explores old Japanese and new jazz sounds, all with the intentional heat of an arsonist’s fire...This is essentially a soundtrack to a movie not yet made.”

“If you find yourself awake at 5:30am on a Saturday morning, sipping hot chocolate and watching the world wake up through your window, this is the CD that should be playing in your apartment. The music on LOUD's "Taikoelectric" is the soundtrack to the world breathing and the soul stirring. It's primitive, spiritual, and fascinating.”

“This trio of electric guitarist Elaine Stef and taiko (Japanese drum) players Eileen Kage and Leslie Komori weaves a rhythmic magic that leaves audiences transfixed. The pulsing, shifting percussion and sinuous, scattered guitar in tunes such as Staying Alive or Tarantella is mood-altering. Whether it's the drummers shouting and coaxing out martial beats paired with accordion on Soran Bushi-Last Potato Polka, or quietly backing the flute on the beautiful April 26, LOUD's fusions never come off as precious or "artsy". If avant-garde music was this genuine and unfettered by mission statements and posturing more often, there would be a lot more listeners for it.”

by Stuart Derdeyn – THE PROVINCE

“I must confess to an initial lack of open-mindedness about LOUD. After all, their name seems more appropriate to a set of 18-year-old punks (and I'm surprised none has taken it), and their line-up -- an electric guitarist and two taiko drummers—seems to scream of an earnest world music experiment that would have me snoozing. I was wrong. Very wrong. Taikoelectric is in fact a remarkable journey that starts with the basic elements involved—the atmospheric guitar stabs and noodles of Elaine Stef (Rhythm Activism) and polyrhythmic drumming of Eileen Kage and Leslie Komori. Having established that foundation, the group goes on to flesh out the intricate possibilites of their line-up, and by the time Komori picks up a flute on "April 26," it sweetens the melody into something simply breathtaking. On tracks like 'Pebbles and Boulders,' the warmth and depth of the Japanese drums drops you into a dark hole of layered rhythms that makes you wonder just what”s going on in frequencies we can”t hear. In contrast, 'Soran Bushi-Last Potato Polka' pulls out all the stops in a stew pot of Eastern European and Asian sounds. Free your mind and open your ears -- LOUD won”t disappoint.”

“This is music that I could have never imagined creating and feel almost enlightened by it. This is definitely one of those albums that you must check out…Especially those who enjoy music from the trance or ambient genres. Just don't look for any electronica effects here. This is pure acoustic and electric rhythm and groove.”

“The cover of ‘taikoelectric’ boasts a multi-coloured, fluid-looking graphic which reflects the flowing, intricate sound of the album. The titles of the tracks draw on pop culture references, both North American and Japanese. The most eye-catching is Loudzilla. The innovative group transformed the destructive Japanese monster Godzilla into a great personal tune... ‘Carpal Tunnel Syndrome’ is a sign of our fast-paced, computer using times. In contrast, ‘Pebbles and Boulders’ evokes images of a Japanese garden. Each track is richly layered, with skillful juxtapositions of instruments from, for a lack of better terminology, the Western and Eastern Traditions.”

“‘Tarantella’... fosters reminiscent feelings of walking through alleys and urban pathways with nowhere to turn...The urgency of LOUD's music demands our focus for its rhythmic frequencies. It will prompt you for an active ear. It will ask for a sentiment. It will promise listeners an electrical effect.”

“Sick of hearing the same tired riffs and canned beats on the radio? Canadian trio Loud shakes off the doldrums of post-’90s pop by fusing electric guitar dynamics to thunderous taiko rhythms, with an occasional flute or accordion thrown in to keep listeners on their toes...”

by Rob Chin – The Advocate 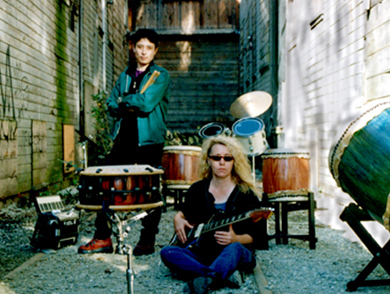